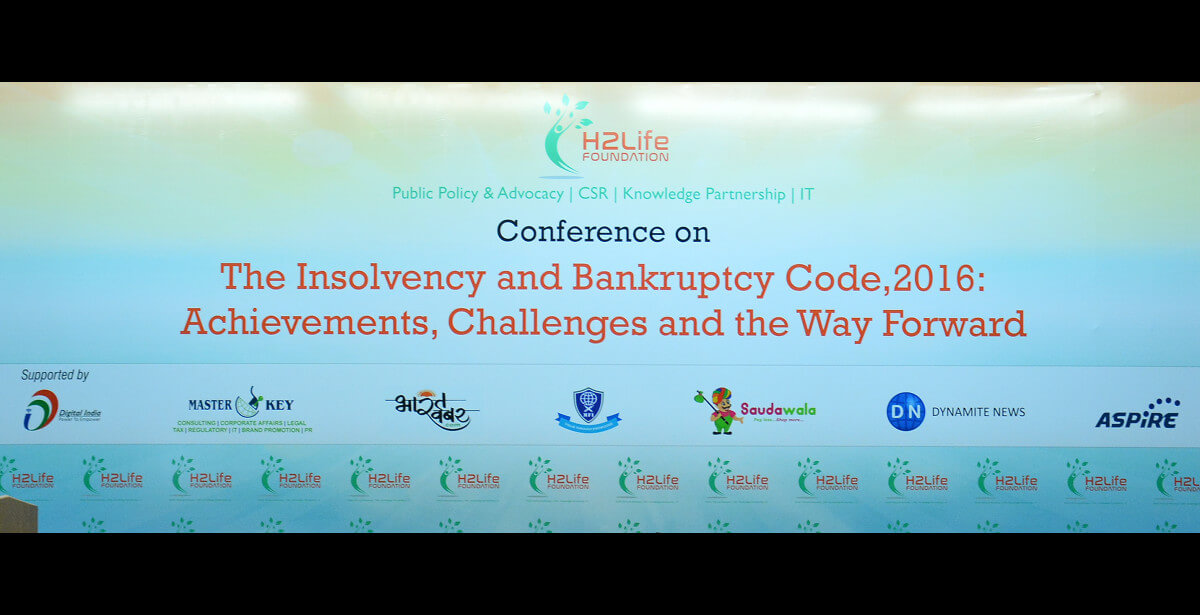 Conference on Insolvency and Bankruptcy Code, 2016

Ms. Preeti Mehta announcing the commencement of the inaugural session.

Many in the audience took the opportunity to ask questions to Dr. Sahoo

Interesting points were raised and clarifications sought from Dr. Sahoo.

An elaborate lunch was served to the delegates. Provided a perfect networking opportunity.

An interesting topic had whetted the appetite of the delegates.

Mr. Manoj K. Mishra making his speech on the challenges and way forward for the code.

Dr. Vijay K. Singh had many interesting points to share with the audience.

Mr. Nesar Ahmad provided a lot of clarity on the code through his speech and presentation.

All questions we addressed and answered by the speakers.

Ms. Alka Kapoor making her speech in the valedictory session.

Mr. Vikas Sharma making the vote of thanks.

With the end of the valedictory session, the conference came to its conclusion.

“The insolvency and bankruptcy code is a path breaking law, one of the biggest reforms next to GST, which would not only streamline the insolvency process but, will also help in boosting business growth of the country.”

Dr. M.S. Sahoo, Chairperson of the Insolvency and Bankruptcy Board (IBBI) was the Keynote Speaker at the inaugural session. Dr. Sahoo was very happy with the efforts of the foundation and congratulated Mr. Vikas Sharma and H2 Life Foundation for increasing awareness among the people about government policies. With regard to the code he said:

On the current progress of the code he informed the august gathering that:

“At least 35 corporate insolvency resolution transactions are presently going on, and involve default of about Rs 4,000 crore in a case.”

Other eminent luminaries who addressed the august gathering included, and we quote them:

“Earlier the process of insolvency took very long but with the new Code it would take much less time thereby clearing bad debts from the market.”

Mr. Anurag Batra, Chairman & Editor in Chief, BW Business World, congratulated H2 Life Foundation for bringing together prominent speakers on a common platform and introspecting such an important law. He also said that

“The new Insolvency Code is aimed at improving the ease of doing business in India, which will lead to better flow of foreign investments”

“The government has done a lot for changing the face of India, the best part of the new code is the government’s commitment to first pay back all the stakeholders”

The Second Session was an interactive session with Mr. Sahoo in which many delegates from various fields asked a variety of question on Insolvency and Bankruptcy code 2016. The main highlight of this session was how IBBI is looking at the possibility of fast-tracking resolution process for smaller cases and those having less complications. Presently, The Code provides for completing insolvency resolution process within 180 days and the time-frame starts from the insolvency commencement date. Now, the idea of bringing it down to 90 days for smaller cases is being looked into.

During this session, they widely discussed and debated how the code will be helpful for new ventures and startups, how the code will ease the problem of cross border insolvency and how it will encourage foreign investments. They also discussed, how entrepreneurs will be able to make a fresh beginning after exiting from failed ventures.

The panelists in the Fourth Session which was related to the “Challenges in the Existing Framework and the Way Forward”, included, Mr. Manoj K Misra, Head of Regulatory, Vodafone; Dr. Vijay Kumar Singh, Associate Professor & Head - School of Corporate Law, Indian Institute of Corporate Affairs; CMA Mr J.K. Budhiraja, CEO Insolvency Professional Agency and Senior Director (Technical), Institute of Cost Accountants of India,  and Mr. Nesar Ahmad, Former President, Company Secretaries Institute. In this session it was discussed that, firstly the policy was creditor driven; secondly the institutional setup is still not sufficient, and thirdly bankers and management professionals were not considered for the Insolvency Professional examination.

In the last and concluding Valedictory Session the delegates were addressed by Dr (Ms) Mukulita Vijaywargiya, Member, IBBI. She congratulated H2 Life Foundation for organising the conference on the new Code and also talked about how she intends to work on the recommendations made during the course of the day.

Mr. Amarjit Singh Chandhiok, Senior Advocate, & Member IBBI Advisory Committee on Service Providers requested the participants to maintain a positive attitude towards the code, and work together towards its effective implementation. CS Ms. Alka Kapoor, CEO, Institute of Company Secretaries of India applauded the Government’s aim of raising the bar to 90th position by 2018 and to 30th position by 2020 as far as ease of doing business with India was concerned. She also praised the Government’s commitment to releases substantial capital locked in NPA (Non-Performing Assets), thereby helping the economy prosper.

Ms. Sushmita Dev, Member of Parliament was thankful to H2 Life Foundation for taking up the Insolvency & Bankruptcy Code for discussion. She asked for White Paper recommendation from the proceedings which she said she will take to the Parliament.

In concluding the conference, Mr. Vikas Sharma gave a vote of thanks to the panelists and the participants and said, “I am indebted and thankful to all the delegates who attended the conference. I am positive that the interactive session with Dr. M. S. Sahoo, Chairperson, Insolvency and Bankruptcy Board of India has brought clarity on the Code, in everyone’s mind. We would also be releasing a white paper on the conference which was held today, and hope to organize similar events in the future.”