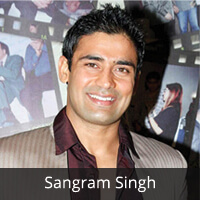 Wrestler Sangram U Singh (Sangram Singh) is a real life hero whose journey started from being an arthritis patient to a world level wrestler.

He was born comparatively weaker than other children to a very humble family. He was diagnosed with rheumatoid arthritis in his childhood that led to major health problems. He spent around 8 years in a wheel chair, his hands and legs stopped working.

Even after health problem and financial difficulties, he never gave up and overcome all the problems with his will power and positive attitude. His passionate commitment towards his dream made him what he is today.

Delhi Olympic Association chose him as a brand ambassador in 2015.

He is also a real life Motivational Speaker whose inspirational words and talks are eagerly lapped up by youngsters who find in them renewed energy, direction and hope.

Nowadays he is one of top motivators among top educational institutions and in the corporate world. He was the official motivational speaker for wrestling Federation of India for 2014-15.

Sangram Singh started ‘Champion’s Pro Kushti’ aimed at tapping into the talent pool in the interiors of the country. The motivation behind the whole exercise is to once again make the country a global wrestling powerhouse. He wants to motivate youth to the sport and give them means to excel beyond the villages and small towns.

Sangram Singh works for the upliftment of the poor and helpless people who have no one to turn to and is associated with several organisations that are involved in such social causes.